The year I turned eight years old was not a good year for me. Receiving news that my grandmother had died was one of the most devastating experiences of my life. She was my nurturer, my cheerleader, my everything. That same year the man who was my mother’s partner began to sexually abuse me. And he swore me to silence by telling me my mother would kill me if she ever found out. And thus began an endless nightmare for three long years and many decades after.

As terrible as that was, you know what was worse? It was being abandoned and rejected by my birth father before I was even born. When I was about three years old I learned that he was very smart and was in high school. So I learned to read without anyone teaching me and I decided to be a good student to win his approval.

I got good grades through elementary school and high school but he never acknowledged me as his daughter. Even though I had met him more than once, he treated me like a stranger. It broke my heart. By the time I completed high school at 17 I gave up on receiving acceptance from my father. I just prayed to find a man who would love me. I met someone who said he loved me but was abusive in his behavior yet I married him.

I think you may have already guessed that this story doesn’t end well for me and him. He’d hit me many times. I had been scared for my life several times. I had called an Assaulted Women’s Help Line. They’d told me it would not get better as long as I stayed. They had suggested that I leave but I had nowhere to go. We lived in another country and I had no relatives there. I felt alone and isolated. What could I do? I prayed and asked God for help.

As if by magic, a lady from my church opened her home to me. I never told her what was going on but she gave me her phone number. She told me to call her if I needed to leave. She said she would have her husband pick me up. Long story short, he hit me one day and I knew it was the last time he’d put his hands on me. He had gone out shopping with his relatives. I packed a suitcase and with $40 in my pocket, I left quaking, shaking and very afraid for what was next. It was an incredible turning point in my life.

As a result of that decision 29 years ago, I found Women’s Empowerment programs and personal development practices that transformed my life forever. I earned a degree in Social Work so I could help empower women and girls. I got bitten by the travel bug and received a teaching certificate that allowed me to teach and travel with my two sons. I’ve had the opportunity to meet my soul mate while living in Asia.

If you were to meet me today you would never guess that I’ve been through such trials and tribulations. But where you start doesn’t have to be how you finish. My life is a dream. I’ve lived in five countries over the past 14 years and have traveled to more than 12. I’m in a loving and beautiful relationship with my soulmate. My two sons are successful young men. I live my passion and purpose as an International Speaker, Author and Success Coach who has helped thousands of people globally.

I don’t know what your circumstances are but if you’ve read this far, there’s a message with your name on it. Your history does not determine your destiny. You too can rise up like a phoenix rises from the ashes. I am no more special than you. If this can happen for me, it can happen for you too. You were born to rise… 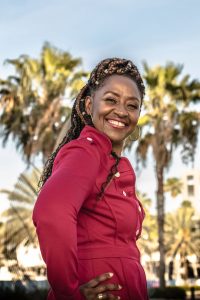